The second series of Cha-Time is under the theme of “Traditional Cultural Wisdom for Climate Action”, which we welcome speakers from the next generation of cultural and climate professionals, ages 18-35, whose work, study, or interests focus on cultural heritage and climate resilience.

For over four hundred years Quiapo district, which is located at the heart of Manila, Philippines, has been witness to political and economic upheavals, the birth and expansion of religious expressions and devotions, and nowadays the aggressive increase of modern development projects in the capital. Moreover, district has earned some notoriety because of the perceivable decay and degradation of its environment. The destruction or demolition of a number of its historic structures contributed to the sentiment that the loss of its heritage is irreversible. The increasing reality of consequences of climate change, adds another layer to the issues already confronting the embattled heritage preservation efforts in the district.

The presentation would highlight the challenges of preservation professionals and advocates alike and how the local community responds to the efforts to protect what remains of the heritage assets of Quiapo. Marianne Claire Vitug or Claire, is the Executive Director of the San Sebastian Basilica Conservation and Development Foundation, Inc, a non-profit organization tasked to preserve the unique all-metal San Sebastian basilica located in the heart of Manila. Claire earned her degree in Humanities from the University of Asia and the Pacific and graduate school studies in the areas of architectural heritage conservation, world heritage management, cultural economics, and sustainable development in the University of the Philippines- Diliman and the Turin School of Development respectively. A member of ICOMOS-Philippines National Committee since 2013, Claire has also been involved in several heritage conservation projects in the Philippines for the past nine years, particularly those involving historic structures that suffered extensive damage during the October 2013 earthquake in Bohol and Cebu provinces. 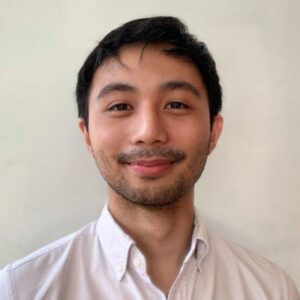 Gio is the current Vice President for Externals of the Heritage Conservation Society, based in Manila, Philippines. He is a graduate of BS Architecture from De La Salle – College of St. Benilde, and was a former intern (2020), now an Associate Member at ICOMOS Philippines (International Council on Monuments & Sites). Gio has previously worked as an architectural designer with Escolta-based architecture studio, One/Zero Design Co., and as a Research & Development Officer at Digiscript Philippines Inc., designing virtual tours for various cultural heritage sites. He is also a partner designer for fundraising initiatives with the San Sebastian Basilica Conservation & Development Foundation, Inc. Gio now works in the construction project management industry with D.A. Abcede & Associates.

This talk is free of charge. Registration is required.
Register Here