Vann Molyvann’s buildings managed to survive a civil war, American bombing and the Khmer Rouge, but they are now threatened by the rapid development of Phnom Penh. Since 2000, many of his buildings have been demolished making way for commercial developments. In 2009, to encounter this urgent situation, the Vann Molyvann Project was established. It is an international team of architects, architecture students and researchers working in Cambodia to document the buildings of Vann Molyvann through surveying, drawing, photographing and archiving, and to raise awareness of these extraordinary works through collaborating, exhibiting, and lecturing.  This presentation discusses the role of the Vann Molyvann Project in sharing, learning and documenting the work of the prominent Cambodian architect Vann Molyvann in contemporary Cambodia. It will also pay attention to how Vann Molyvann’s work adapts the modern language to Cambodia’s culture, climate, and built environment. 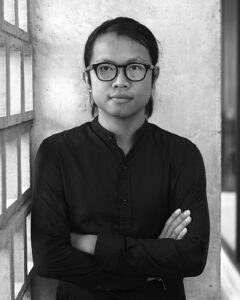 Freelance architect, urban researcher and director of the Vann Molyvann Project; an international team of architects, architecture students and researchers working in Cambodia to document the buildings of Cambodia’s prolific architect Vann Molyvann. His works on Phnom Penh’s Urban Form and Cambodian Modernist Architecture have been the subject of several exhibitions and presentations in Cambodia and at selected venues in Southeast Asia, Australia and the United States. He has contributed essays to scholarly journals, architecture magazines and books, including Docomomo, a+u and ARCH+. He has been awarded numerous grants and fellowships from national and international institutions such as Asian Cultural Council (2012), Parsons the New School (2012), US/ICOMOS and East West Center (2015), SaSa Art Projects (2015) and Graham Foundation (2019). Pagna is currently a participating scholar in Site and Space in Southeast Asia funded by the Getty Foundation, and a recipient of Hong Kong PhD fellowships and the University of Hong Kong Presidential award where he is pursuing a PhD in Architecture and Urbanism.